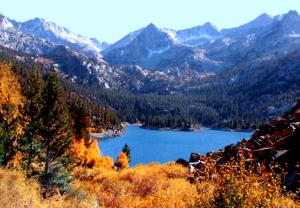 If your house were on fire, what would you save?

That’s the question addressed in a new report from the Endangered Species Coalition, entitled “It’s Getting Hot Out There: Top 10 Places to Save for Endangered Species in a Warming Word.” The report, which the Natural Resources Defense Council and other conservation groups contributed to, sheds light on the daunting question of where and how to start implementing conservation measures in the face of climate change.

Focusing on North America, the report identifies 10 critical ecosystems endangered by climate change, including the Greater Yellowstone Ecosystem. Home to grizzly bears and the majestic whitebark pine, the mountain forests of Greater Yellowstone are currently under attack by a climate-driven explosion of mountain pine beetles. Arctic sea ice, coral reefs, and the Gulf Coast are among the other critical areas cited in the report.

Whitebark pine trees are a foundation of alpine ecosystems across the American West and are particularly important in Greater Yellowstone. These enormous trees provide food and shelter from animals ranging from birds and rodents to the iconic grizzly bear, which feasts on the calorie-rich whitebark pine seeds when preparing for hibernation in the fall. The broad canopies of whitebark pines also shelter and shade the mountain snowpack, creating a slow melt that ensures water will flow into the dry summer months.

But as I’ve explained before, warming mountain temperatures are allowing the hungry mountain pine beetle to thrive in previously inhospitable high-elevation whitebark pine forests, where the trees have no significant defenses against the beetles. Despite the beetle’s small size – an individual looks similar to a chocolate sprinkle – the ballooning populations of these insects have killed entire swaths of ancient whitebark forests. A recent aerial study of whitebark pine in the Greater Yellowstone Ecosystem, conducted by NRDC in partnership with the U.S. Forest Service, showed that over half of the whitebark pine forests in the region have already suffered medium to high mortality from the beetle outbreak. (See the whitebark pine page on NRDC’s website for more information on this report.)

Yet the goal of the new Endangered Species Coalition report is not to spread gloom and doom about the impending climate change crisis. Instead, the report focuses on proactive conservation measures that can help protect endangered species as they face the challenge of adapting to climate change. The Greater Yellowstone section, for instance, highlights the need for further research on whitebark pine and greater protections for grizzly bears habitat as part of a broad program to respond to the effects of the region’s declining whitebark pine.

The U.S. Fish and Wildlife Service is also currently considering listing whitebark pine as threatened or endangered, in response to a petition by NRDC. A listing designation would trigger a federal recovery plan and could bring important resources for whitebark protection and restoration.

There’s a lot to be done – and fast – if we are going to save endangered species and their ecosystems in a warming climate. This report gives us both a framework for planning and a place to start. Ten places, actually. Let’s get to it.

In addition to downloading the report, check out ItsGettingHotOutThere.organd NRDC's whitebark pine page for more information on climate change, endangered species, and what you can do to help.