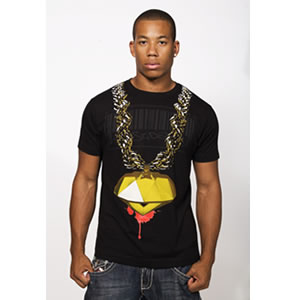 A new fashion that has been brought to Philadelphia introduces the use of organic fabric while expressing a people and earth positive message through its design. The company introducing this new product is called Lastdays. Lastdays not only expresses its desire for an eco-friendly lifestyle though the creation of its clothing, but also through the words and expressions shown on the clothing. I had a chance to interview the co-owner/Chief Marketing Officer James Freeman to find out a little bit more about this innovative green fashion movement.

The decision to go for this type of inspirational movement

Lastdays wanted to go beyond the typical clothing company by creating a people positive and earth positive movement. It is important for them to connect with their customers on both an emotional and intellectual level. They were looking for "mostly people who care about fair-trade practices or those who care about doing something to reduce environmental impact by limiting their own carbon footprint either by being more energy efficient or by supporting companies that have green standards." However one does not have to believe in Lastdays' ideals just to wear their clothing, they welcome everyone!

Lastdays hopes to connect with people of all ages; however they are mainly focused on the 15-35 age range. Since learning about the environment and organic clothing can sometimes be boring, the hip urban street-wear fashion attempts to be more appealing and fun for the younger generation. This great fashion can spread the 'green' message to people of all ages by sparking a dialogue with the phrases on their clothing. Their Chief Marketing Officer, James Freeman, see it like this, "As time goes on people will catch on and hopefully our brand will be associated with our ideals of being People Positive and Earth Positive."

Does the use of organic natural/sustainable fabric change the quality and/or care of the clothing?

The quality and care are not affected. According to Freeman, actually how they "blend the organic cotton gives it a soft feel and texture which in turn gives it the high quality one would expect from a $35 T-shirt. There is organic cotton which uses no chemicals to produce and there is regular cotton which uses insecticides, herbicides, synthetic fertilizers, and other chemical agents that are harmful to the environment. In the end, you still have cotton and it's impossible to distinguish between organic and non-organic cotton by the look and feel, unless you did some sort of scientific testing in a lab."

Currently Lastdays clothing line is unique, and of the highest quality within their market; however it can not be found at a local mall. They can only be found on-line or at retail boutiques. Most of their customers are into non-mainstream "indie clothing lines." However, eventually as they grow, Lastdays will take advantage of the opportunities to go mainstream, in order to spread their message and support their cause "on a higher level."

1% of the sales at Lastdays is donated to environmental organizations by partnering with an organization called 1% for the planet. "1% For the Planet has over 1,500 environmental non-profit groups that have been researched and okayed to receive donations from member companies," says Freeman.

The difference in Lastdays 2009 line is that they just decided to go completely green by offering organic cotton or a blend of other sustainable fabrics like bamboo or hemp. Prior to 2009 they just had a few organic shirts in their line.

Find out more about Lastdays at www.LastDaysWear.com.

To find out more about becoming eco-friendly and helping to save the environment in an easy and fashionable way visit the Lifestyle section at Green and Save.