Palin in Philly - Votes, Cheesesteaks, and the New Yeoman 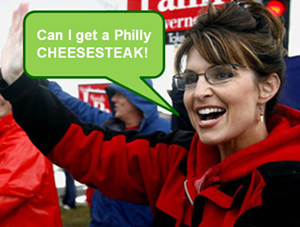 Having partially recovered from the Katie Couric interview fiasco with wit, smiles, and an upbeat message in her first and only debate with DE Democrat Joe Biden, Sarah Palin rolled into town last month, looking to sprinkle some girl next door charm on the City of Brotherly Love.

And, while the Flyers’ game puck drop earned her mixed reactions at best, in a more established political ritual, she shined.  The second the kids got hungry, she piled them in the van, headed to Tony Luke's in south Philadelphia, and ordered a tablefull of cheesesteaks, whiz, onions, and all.

Word is that Sarah prefers mooseburgers, but we fully expected that when opportunity struck, she’d flaunt her Philly street cred by getting her hands greasy at one of the landmark steak shops.  It’s simply the way things are done around here.
Back in April, on the eve of the Pennsylvania Primary, NBC Nightly News put together a solid two minute piece about Hillary Clinton, Barack Obama, and the cheesesteaks they'd eaten in Philadelphia over the past week. Ketchup and onions dripped from smiling political chins, as, apparently, both felt that the best way to endear themselves to the State of Pennsylvania was to eat a big, messy, meaty sandwich.

But what if Sarah Palin was a vegetarian?  What would have happened if she’s stepped to the griddle on Saturday and called for extra mushrooms, extra cheese, and no beef?

Trouble for her, that's what.  I don't think this country is ready to elect a vegetarian to high political office.

Now maybe this isn't important. It certainly isn't as important as the fact that we continue to have trouble electing anyone that's not a white male. But I think it's worth considering nonetheless.

How would people do if a candidate said he didn't eat chicken because he thought industrial chicken cages were inhumane? How would voters react if a candidate said she didn't feel right supporting cattle farms because of the outrageous amount of methane they emit? What would we think if a candidate made a personal commitment to buying local and in season and from sustainably managed farms?

A few days before Obama and Hillary did their cheesesteak photo ops in April, Michael Pollan wrote an article in the New York Times Magazine.  And I think it offers a fascinating path to a new culture. A culture that, among other things, embraces green leafy foods and agricultural responsibility.

Pollan suggests that we all grow a little something to eat. One tomato plant. A pot of basil in a windowsill. Anything. And asks us to see how we like it. Pay attention to the plant as it grows. Measure it. Smell it. Taste it. Notice the couple of dollars we save. And notice that it's fun.

Who knows. Cheesesteak Culture's roots are deep. Maybe a few herb gardens won't affect anything. But I like Pollan's idea. And I'd love to see us achieve a level of collective open-mindedness that would make it possible for a vegetarian to win a big election.
When it comes to eco-efficiency, it takes about six gallons of water to grow a head of lettuce, while it takes over a thousand gallons of water to produce a serving of steak. Growing the feed for the cows, washing the cows, and even putting water in the radiators to haul the cows, all adds up to a big water use. Plus with all the feed farming and transportation, a single pound of beef has the equivalent CO2 Emissions as driving a car for three weeks. Food for thought.
Author Jake de Grazia is one of the contributing writers for GREENandSAVE.com. Learn more about eco-lifestyle options and great ways to reduce your Carbon footprint here: Eco Lifestyle