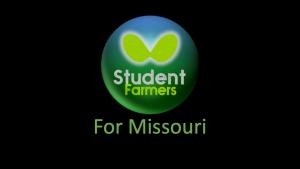 Our GREENandSAVE Staff is pleased to inform our members and readers about organizations that are helping to promote sustainability. If you would like us to profile your organization please Contact Us.

Student Farmers is actively looking to recruit a student ambassador in Missouri, as well as farm mentors in Missouri that can help guide students. Overall, student farming is a great way to reduce the distance from farm to table and increase health for students as well as their parents.

Here is an overview on Student Farmers

Student Farmers is a growing group of students who are committed to in-home and in-school sustainable farming as a means to promote physical fitness and environmental stewardship.

Our Mission: To improve health and nutrition education, combat the challenges of climate change, and support each other in generating some revenue to help pay for college.

Our Vision: To increase knowledge about the advantages of eating more heathy and locally grown vegetables across the range of high school and college age students. We also hope that many of the parents of the students will learn from their children’s engagement in our organization and adopt a diet with less processed foods to reduce the growing cost of healthcare.

Here is an example of an agriculture education program in Missouri:

Growing up on farms in northwest Missouri, Terry and Susan Ecker have long had an affinity for agriculture and Northwest Missouri State University’s support of the industry through its programming and focus on preparing graduates for success in the field.

Those connections inspired them to further support Northwest and its future ag programming by contributing to the University’s Agricultural Learning Center (ALC). The Eckers are members of the University’s Homesteaders society of alumni and friends who have provided leading support with gifts of $25,000 or greater toward the ALC.

“Growing up, I’ve been very familiar with Northwest and always thought it was a good school,” Terry said, acknowledging he attended the University of Missouri-Columbia, where he earned a bachelor’s degree in agriculture, because he wanted an experience further from home. “Since I came back to the farm, I’ve tried to stay involved with what was going on with the ag department.”

Terry is a fifth-generation Nodaway County farmer near where his great-great-grandfather, John Martin Ecker, settled in 1868 outside of Elmo, Missouri. Today, Terry and Susan operate Ecker Farms Inc., raising row crops, including grass and hay, for their Saler-crossed cattle operation. The Ecker family was the American Salers Association Commercial Producer of the Year in 2011.

Susan, in addition to growing up on a farm in Holt County and supporting the Eckers’ operation, is a licensed clinical social worker and practices mental health counseling. She studied psychology at Northwest for two years before transferring to Tarkio College where she completed her bachelor’s in psychology. She also earned a master’s degree in social work from the University of Missouri-Columbia.

The Eckers have an interest in service, too. In addition to serving with state and national soybean boards, Terry is a member of the Missouri Highways and Transportation Commission and is past-president of the Nodaway County Farm Bureau, for which he coordinated its centennial celebration in 2018. Susan, meanwhile, serves on the St. Francis Hospital Foundation board in Maryville.

Their support of the Agricultural Learning Center is an extension of their regional and state service, Dr. Rod Barr, the director of Northwest’s School of Agricultural Sciences, said.

“We are very appreciative of the financial support from Terry and Susan,” Barr said. “Having known them for a number of years, they focus not only on the agricultural industry, but they recognize the importance of service to the community and region in which they live. Their commitment to the Agricultural Learning Center is a testament to their focus on promoting agriculture and education within Nodaway County and beyond.”

Terry became aware of Northwest’s plans to build the ALC through conversations with Barr and Laurie Long, a senior gift planning officer with Northwest’s Office of University Advancement. Opened during the summer of 2021, the 29,500-square-foot multipurpose facility features laboratories, a kitchen, classrooms, study spaces and offices as well as a large exposition space and an outdoor education plaza.

In addition to enhancing the School of Agricultural Sciencesand its curriculum, it addresses infrastructure needs at the 448-acre R.T Wright Farm related to academic facilities, parking and farm production. It enables further innovation and partnerships while addressing best practices for the Northwest campus and agricultural sciences.

As a proponent for ag advocacy and education, Terry believes the facility will advance Northwest’s ag sciences programming for youth while assisting Nodaway County, regional and national producers. With that in mind, he was quick to help ensure the Nodaway County Farm Bureau had its annual meeting at the ALC soon after the facility opened.

“It’s exactly what I envisioned,” Terry said. “There’s nothing like that in the area. I have high hopes for it to really promote the area, whether it’s through livestock shows or ag events. Having the classrooms and the facilities that the students can use right on the farm, I just think it’s fantastic.”