A Carbon Negative Wonder: The Story of Bhutan 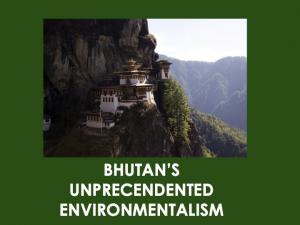 Often overlooked because of its location off in the Himalayan mountains, Bhutan lies between China and India, two countries who in 2015 lead the global community in terms of carbon emissions at first and third respectively. [1] Bhutan, on the other hand, has quickly become the world’s only country to be carbon negative, producing only approximately 1.5 million tons of carbon each year, which is offset by their abundant forests that absorb more than 6 million tons annually. [2] As the impacts of global climate change and ever increasing emissions have begun to present themselves, countries have started to spend more money on humanitarian aid to help those disaster struck areas. As these costs continue to rise in unison with rising carbon emissions, countries must take a step back and ask themselves: How has Bhutan become so environmentally friendly, and what can we do to mimic their success?

Bhutan’s achievements can largely be attributed to the government’s commitment to action, including everything from subsidization to pushing social campaigns calling for change. To start, one of the government’s goals in becoming more eco-friendly was to invest in hydroelectric power, which is not only a renewable and clean energy resource, but also helps control water supply and irrigation. [3] Furthermore, in part due to this increase in renewable energy, Bhutan’s government has started to provided its rural families with free electricity, to ensure that they are not burning wood in order to cook their food and/or provide heat for their homes. [4] Additionally, the government has worked side by side with Nissan to provide its citizens with hundreds of electric cars to discourage the use of vehicles that produce carbon dioxide, hoping to in the future continue this partnership and provide thousands more cars to citizens. [5] The government also subsidizes LED lights for its citizens, which helps every person in the country feel as if they are contributing to its carbon negative status by allowing a more eco-friendly energy option to be cheaper than it might normally be. [6] This extent of government intervention has proved to be extremely beneficial to the environmental friendliness of the country, and has even allowed Bhutan to set unprecedented goals that other countries will not be able to even consider for decades. To expand, non governmental organizations, such as Clean Bhutan, are an ideal example that highlight how achieving this carbon negative status requires everyone’s effort, as the group, made up of everyday people, focuses on cleaning rivers and hiking trails throughout the country. [7] This idea of everyday people initiating change is one of the major reasons behind Bhutan’s success, evident in their Guinness World Record of only 100 people planting 49,672 trees in a single hour. [8] Their commitment to valuing the environment over industrialization has allowed Bhutan to set goals of growing 100% of its food organically by 2020, producing zero waste by 2030, and also have more recently discussed going paperless. [9]

The Role of Tourism

Bhutan, who relies heavily on tourism to promote its economy, still does not allow foreigners to come easily, requiring not only a $40 visa fee, but also a “Minimum Daily Package Fee” of $200 to $250 depending on the time of year. [10] These costs, which may be very steep for some tourists, cover lodging, meals, a tour guide, and more. [11] Additionally, approximately $65 of this fee goes to sustainable development funding for education, poverty alleviation, and ensuring that the infrastructure within Bhutan is up to code. [12] It’s important to point out that despite all of these fees, Bhutan’s tourism industry still increases yearly because of the willingness of consumers to see the natural beauties of Bhutan that have not been destroyed from fossil fuel emissions and global climate change. The lengths that Bhutan’s Tourism Council goes to in order to ensure sustainable growth and development emphasizes the key to becoming carbon neutral has been effective government leadership that is not afraid to steer off course of what has been considered to be the traditional method of growth throughout history, industrialization.

An Example for the International Community

The rest of the world should look to Bhutan for potential commonalities between what they have accomplished and the opportunities for other countries to follow the same general principles. For example, as mentioned earlier, Bhutan has spent a great deal of effort in investing into hydroelectric power, and while every country may not have the same access to waterways as Bhutan, they may have a higher insolation level. Furthermore, a country such as South Africa, whose experiences a lot of sunshine throughout the day, should thus consider investing into solar energy, a renewable energy resource that could ideally lead to the same positive results Bhutan is seeing right now (only through a different means). Additionally, the Bhutanese government, also as mentioned earlier, subsidizes LED lights, which would be a smart move for any government to follow suit with as it promotes the use of clean, energy efficient solutions. An example of a company already providing these lights is Independence LED Lighting, who produces made in USA LED fixtures that save energy and create domestic jobs.

For more on what you as an individual can do to contribute to a greener nation, See: