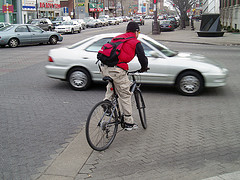 There are a lot of “eco-chic” ways to save the environment and cut down costs for conscientious consumers. Unfortunately, riding your bike to work isn’t one of them.

The brave souls you see on highways or in busy intersections, trying desperately to dodge traffic and menacing stares, often face physical challenges as well. These include non-existent bike lanes, stop-and-start sidewalks, and unsafe drivers. Many bicyclists have to go significantly out of their way to make it safely to work, relying on quiet backstreets with less traffic.

Many towns have tried, unsuccessfully, to introduce initiatives to address bicyclists’ concerns. Recently, efforts to introduce “complete streets” in Montclair, NJ, failed to garner support from community members (the policy eventually passed, but it took enormous political effort). “Complete streets” is a concept that’s been endorsed by many city planning groups who claim that current street designs only accommodate drivers’ needs at the expense of other commuters. A more encompassing design would create additional spaces for bikers, pedestrians, aged and young citizens, as well as those with disabilities.

The designs have garnered criticism from individuals who believe that the road should be a space for drivers only. Many have had negative experiences with bicyclists coexisting with vehicles, and argue that a “share the road” policy would endanger drivers and cyclists alike.

It’s a valid concern — particularly on the part of bike riders. Recently opened bike lanes in Philadelphia have proven to be problematic. Bicyclists often ignore the rules of the road while riding in the city, and drivers have been known to use the new bike lanes as passing lanes. The tension between cyclists and drivers is a longstanding one exacerbated by public servants who side exclusively with the rights of the majority (drivers).

Nationally, over 52,000 cyclists were injured during traffic crashes in 2008. That number represents a 21 percent increase in injuries from 2007, despite the fact that national injuries and fatalities associated with traffic crashes have decreased steadily since 1961. “Sharing the road” has led to a significant increase in danger associated with commuting via bicycle.

Concerns about safety, from both bikers and drivers, stem largely from misunderstandings on each side of the debate. In general, city drivers are more aware of the presence of bikers on roads and are more familiar with sharing the road. Suburban towns tend to have high levels of car traffic and very few bike commuters, so suburban drivers tend to have less experience and awareness than those who are used to the idea of bicyclists on the road.

According to The US Census Bureau’s 2008 American Community Survey, Philadelphia has now become number one among the major cities in the U.S. in 2009 for bike commuters; however, the numbers are still dismal when it comes to cycling to work. In 2008, only one percent of commuters commuted via bike to work, whereas 77 percent of drivers made their way to work by themselves. The consequences of these daily decisions, many of which are due to the lack of convenience and safety associated with bicycle use, are immeasurable. Governments that are concerned about their citizens’ well-being should consider the long-term impact of creating road designs that cater exclusively to drivers.

While it might be politically or practically expedient to accede to the demands of automobile-owning voters, it is ultimately irresponsible to deny individuals safe access to alternative modes of transportation. At the end of the day, adding bike-friendly lanes to communities across the country, particularly in highly congested areas like Philadelphia and South Jersey, is an important first step in encouraging individuals to change their commuting habits to help the environment.