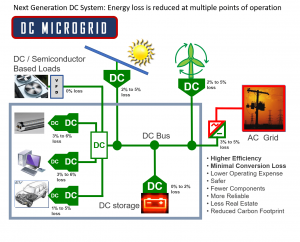 Excerpt: It’s worth revisiting Edison’s vision of local electricity generation. We and other champions of this idea refer to a system of local power generation and distribution in the form of direct current as a DC microgrid. The modern conception is quite similar to what Edison had in mind, but with the added benefit that the local DC grid is able to operate either in parallel with the surrounding AC grid or in isolation from it.

DC microgrids, with their much smaller footprints, avoid most transmission and distribution losses. They also eliminate the waste of energy associated with the conversion of AC to DC, which is required for so many of the electrical loads found these days: LED lights, variable-speed motors, computers, televisions, and countless other forms of consumer electronics—loads that account for a steadily increasing fraction of the electricity consumed. (Some estimates suggest that most of the electricity used in commercial buildings already goes to serve such loads.) In a time of increased concern about energy efficiency and carbon-dioxide emissions, DC microgrids obviously have a great deal to offer. Yet traditional AC distribution systems are still all most people ever think about when you use the term “power grid. 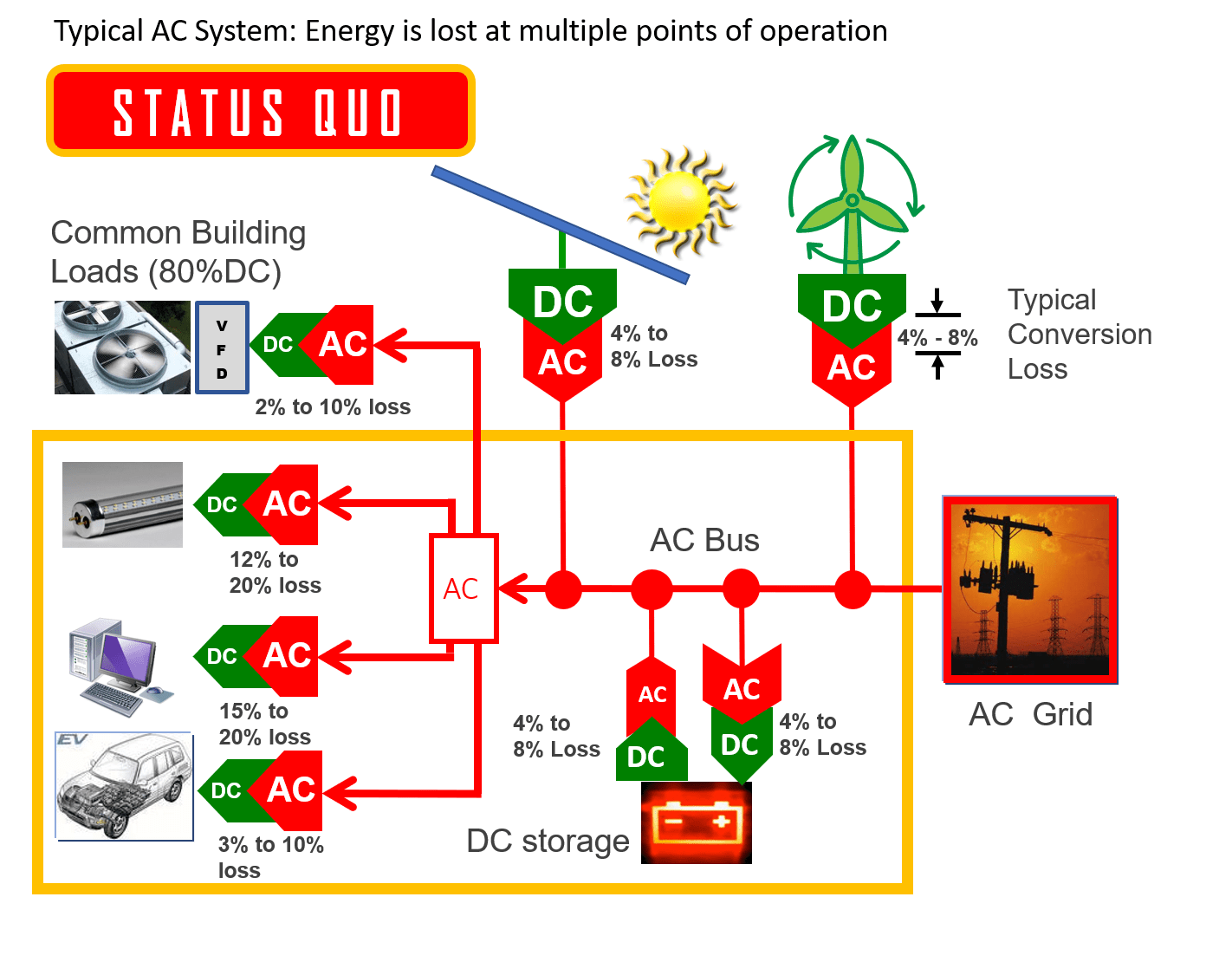 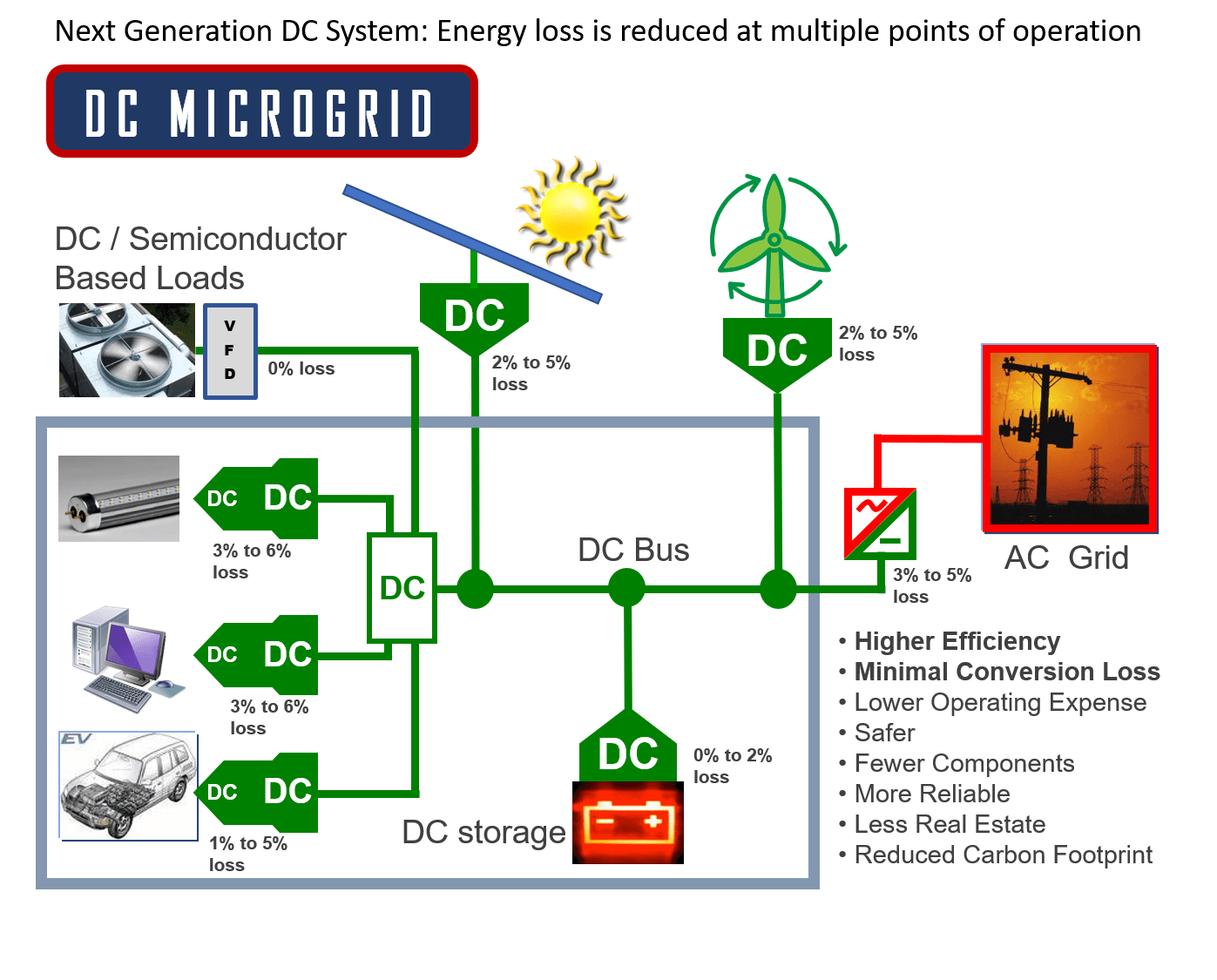 DC Microgrids have a significantly improved Total Cost of Ownership (TCO). Beyond the driverless approach, use of safe-to-the-touch Class 2 wiring allows for a much more simplified labor installation as compared to traditional AC methods.  Use of simple 2 conductor wire can be installed with Low-Volt or General Trades labor resources. Facility owners and managers save both time and hourly rate costs, as compared to traditional electrical labor.

By establishing a DC microgrid based backbone to power lighting, controls and other loads, it can be easier to connect additional power sources to the DC buss such as Photovoltaic (PV) solar, DC power from wind driven generators, fuel cell generators or all 3 renewable sources.  By basic engineering of DC voltage performance, a DC bus can be very effectively managed. Accomplishing the same with AC technology would require use of less reliable inverters that then require phase management to work with other systems.

Future army outposts in war zones will probably use them to reduce energy consumption and to deploy wind turbines and photovoltaic panels more easily. Replacing the usual diesel generators with renewable sources of power would be especially valuable in hostile territory, where fuel costs can be enormously high, both in dollars and in lives lost protecting supply lines. Other reasons to expect a proliferation of DC Microgrids come from the developing world, where about 3 billion people still burn wood, charcoal, or animal dung to meet their day-to-day energy needs. These people are, of course, eager to see electrification reach their communities, but it’s far from clear what form that electrification should take.

Developments on the generation side only strengthen the case for DC Microgrids. Consider how often you see photovoltaic panels mounted on the roofs of houses or commercial buildings nowadays. These panels produce DC power. And even if all that power is used within the building where it is generated, the electricity flowing from those panels is typically converted to AC using an inverter, which wastes about 10 percent of the energy right off the bat. The AC is then sent to various loads, some of which convert the electricity back to DC, in the process squandering about a third of the energy fed to them. Being able to distribute and use DC within a building would prevent the substantial losses that result from having to make the round trip from DC to AC and back to DC again.

Events like 2012’s Hurricane Sandy also highlight the advantages of local power generation, storage, and distribution through DC Microgrids. That one storm caused more than US $50 billion in damages and left many residents of the U.S. Northeast without power for days, weeks, in some cases even months. DC microgrids fed by batteries, generators, fuel cells, photovoltaic panels, or small wind turbines would surely have proved much more resilient in the face of this natural disaster. They would have been less prone to the most common form of damage—the downing of power lines—and the DC electrical equipment itself would probably have exposed far fewer critical points of failure.

Independence LED Lighting’s DC LED fixtures are “driverless” with 24 volt DC wiring from a “Power hub Driver” (PhD), which is provided by the company’s strategic partner Nextek Power Systems. Together, they are at the forefront of DC Microgrids, with the proven systems that leverage high efficiency power converters and smart controls to optimize energy usage while drawing power from renewables, batteries, and/or the grid. The technology reduces the payback time for lighting ROIs and improves control functionality, yielding the most practical solution for powering LEDs for facilities across the public and private sector.

For more information or audits regarding DC Microgrids, please contact: