What the Stimulus Means to You! 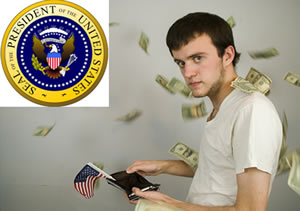 President Barack Obama signed the historic American Recovery and Reinvestment Act this past Tuesday, turning the roughly $800 billion bill into a law. This means that there will be an influx of a large amount of money into the economy in the very near future. In order to understand how this affects the average homeowner, it is vital to look into the details of what this plan seeks to do on that front.

In total, the American Recovery and Reinvestment Act will attempt to create and save 3.5 million jobs over the next few years, but plans to give 95% of Americans a tax cut now. Tax cuts play a role in the stimulus, but the largest portion of the bill seeks to invest in infrastructure, such as roads, bridges, mass transit, and energy efficiency in existing federal office buildings. The plan will also restore science and innovation to the policy decisions and actions of the Obama Administration.

The ARRA seeks to promote energy-efficient investments by homeowners by extending and expanding tax credits for purchases such as new furnaces, energy-efficient windows and doors, and insulation through 2010. It also gives families a tax credit of up to $7,500 if they purchase a plug-in hybrid vehicle in order to get a green car presence on the road sooner, rather than later.

In addition to the tax credits on some home improvements, the ARRA allots another $5 billion to improve the energy efficiency of more than 1 million modest-income homes by means of weatherization. This plan will save modest-income families on average $350 per year on heating and air conditioning bills. This portion of the plan works in accord with another $6.3 billion that will go towards increasing the energy efficiency of federally-supported housing programs, including Housing and Urban Development-sponsored low-income housing for the elderly and the disabled.

In addition to the provisions for home improvements, there is plenty in the bill that will help you physically improve as well. The ARRA will protect health care coverage for millions of Americans during this rough patch by supplying an additional $87 billion over the next two years in supplemental federal matching funds to help states maintain their Medicaid programs as state budgets begin to get trimmed. This provision will help states avoid cutting or scaling back eligibility or services covered for Medicaid.

In the course of constructing this bill, it should be noted that no earmarks or pet projects were contained in the final product, and in many cases the ARRA simply refilled the coffers of programs and agency’s with proven track records. And also, the ARRA will demand unprecedented accountability with transparency and oversight that will help to ensure that taxpayer dollars will be spent wisely and efficiently.

GREENandSAVE.com is a free resource for anyone that wants to save energy, money, and the environment. The articles, product reviews, online tools, and return on investment calculations are researched from a diverse range of public and private sector sources. Overall, the company is passionate about saving money as well as creating healthy homes, offices, and lifestyles.

To learn more about the American Recovery and Reinvestment Act in all its wonder, check it out on the web at Recovery.gov . But just to warn you, the Act is over 1,000 pages in length. Here are some details on Tax Credits and Grants . But if you want to skip over the details and focus on weatherizing your home now, think about getting an Energy Audit or Home Efficiency Checkup . Or, to learn more about new careers in the Eco-Economy, see  Green Collar Jobs in the Philadelphia area for Home Efficiency Consulting.