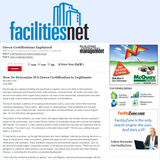 How To Determine If A Green Certification Is Legitimate

Flip through any catalog of building and maintenance supplies, and you’re likely to find numerous packages touting the environmental merits of the products contained inside. As facility executives have become more aware of the impact many products can have on the environment, manufacturers have been trying to gain market share by broadcasting their products’ eco-friendliness.

The result has been a plethora of competing environmental claims, some valid, others little more than marketing propaganda. These claims, often known as “greenwashing,” have proliferated over the past several years, says Charlie Szoradi, chief executive officer of GreenandSave, an online source of green data. “It’s the Wild West with greenwashing.”

The problem is that marketers can make claims that appear legitimate, but actually obscure a product’s impact on the environment, says Kirsten Ritchie, director of sustainable design and licensed civil engineer with Gensler. For instance, a claim stating a product is free of chemicals may give the impression that it’s eco-friendly. “You have to ask, ‘On what basis is the claim being made?’” Ritchie says, adding that even water is a chemical.

To help facility executives cut through the bombast and make intelligent, informed purchasing decisions, a range of organizations, trade associations, government agencies and companies have developed green certifications and standards. These standards measure the environmental aspects of products, such as the amount of volatile organic compounds emitted, or the percent of recycled content. “These are sets of guidelines or criteria for which products can be judged,” says Elaine Aye, principal with Green Building Services, a consulting firm focused on sustainable development.

Many building owners and occupants increasingly want some assurance that the buildings in which they spend their days won’t have a negative impact on the environment, or their health. “Many of our clients definitely want to go to facilities that are healthier and sustainable,” says Melissa Mizell, senior associate with Gensler. Of course, facility executives also bear the brunt of complaints when occupants feel that a building environment is less than healthy. Standards of the Standards

Green certifications can help facility executives sort through competing claims. However, even some of the certifications themselves don’t offer clear-cut solutions to the problem of greenwashing. Some are legitimate, and purchasers can feel confident that they accurately represent the product. Others are, once again, little more than marketing claims. Some guidelines can help distinguish between the two.

Environmental claims fall roughly into three groups. The first is first-person claims, or claims made by the company that produced the product, says Aye. Examples include marketing data, as well as the information submitted on Material Data Safety Sheets (MSDSs). These may or may not have been verified by an independent party.

Sometimes, these types of claims are not backed by strong scientific data, says Deborah Fuller, senior interior designer and sustainable knowledge leader with HOK. They tend to be more marketing-oriented than true indicators of a product’s environmental impact.

Next are second-party claims, which come from an entity other than the manufacturer. An example would be a standard set by a trade association, such as the Carpet & Rug Institute’s (CRI) Green Label program, says Fuller.

While it may seem that a standard set by a trade organization would be inherently biased, that’s not necessarily the case, Fuller says. “They can be legitimate, but they need to provide data that says, ‘This is the testing we’ve done, and these are the results.’”

CRI’s Green Label program, for instance, is incorporated into the LEED standard for indoor carpet, Fuller says. Moreover, CRI has begun working with the American National Standards Institute, or ANSI, to make the standard more transparent. The goal is to increase its credibility, she says. Another example is FloorScore, which was developed by the resilient flooring industry in conjunction with Scientific Certification Systems (SCS), an independent organization that tests environmental claims.

The final category is third-party certifications. Here, the manufacturer pays an independent group to test the product and verify that it meets a standard. These are generally considered the most credible. “In the best of all worlds, companies would make environmental claims based on publicly available, consensus-based standards that are verified by independent third-party certifiers,” says Ritchie.

The third party may be a non-profit with no financial ties to the manufacturer, Fuller says. Examples include Greenguard and Green Seal . Greenguard, for instance, worked with ANSI to become an official standard-setting organization, says Marilyn Black, a member of the advisory board of the Greenguard Environmental Institute.

The standard should also have “geographic reach,” says Ritchie. That way, manufacturers around the world can apply the same standard.

It’s also important to keep in mind that a certification may cover just a single attribute of the product, or multiple attributes, Mizell says.